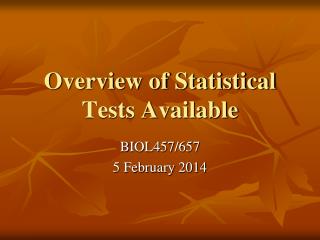 Overview of Statistical Tests Available. BIOL457/657 5 February 2014. Deciding Which Test to Use. Is DV meristic, mensural, or categorical? Is IV continuous or discrete in its variation? If IV is discrete, are two groups being compared, or more than two? Are there multiple IVs?.

Audit Sampling: An Overview and Application to Tests of Controls - Introduction. ___________ standards recognize and

Chapter 9: Statistical Inference: Significance Tests About Hypotheses - . section 9.1: what are the steps for performing