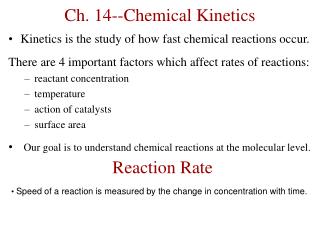 Kinetics is the study of how fast chemical reactions occur. There are 4 important factors which affect rates of reactions: reactant concentration temperature action of catalysts surface area Our goal is to understand chemical reactions at the molecular level. Ch. 14--Chemical Kinetics.

Chemical Kinetics - . how fast is it?. reptiles. what happens to your lizard if it gets cold? he hibernates. why?. the