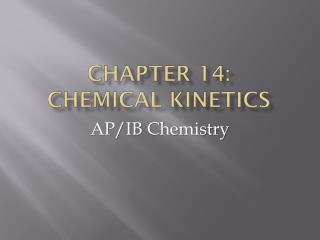 Chapter 14: Chemical Kinetics. AP/IB Chemistry. Reaction Rate. Reaction Rate: speed of a chemical reaction Change in concentration of reactant or product in a given amount of time Units: M/s. The Collision Theory.

Chapter 9 Chemical Kinetics I. The Basic Ideas - . ~thermodynamics is concerned with the direction in which a process

CHAPTER 3 CHEMICAL BONDS - . the world around us is composed almost entirely of compounds and mixture of compounds. most

Chemical Reactions and the Environment - . ch 8. key concepts in chapter 8. how different factors change the rates of

Chapter 2: The Chemical Level of Organization - . introduction to chemistry. matter is made up of atoms atoms join