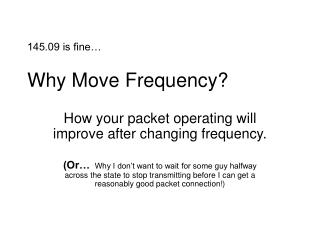 145.09 is fine… Why Move Frequency?. How your packet operating will improve after changing frequency. (Or… Why I don’t want to wait for some guy halfway across the state to stop transmitting before I can get a reasonably good packet connection!). The Present Situation.

Going On the Air - . pages 79 – 87 by joe seibert. going on the air . choosing an operating frequency you should

Introduction to Frequency Domain Analysis (3 Classes) - Many thanks to steve hall, intel for the use of his slides