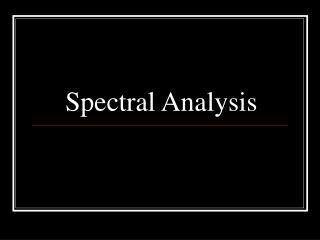 Spectral Analysis based on the Adjacency Matrix of Network Data - . leting wu fall 2009. mathematical representation of

Spectral Analysis - . march 3, 2011. friendly reminders. korean stops exercise is due on tuesday. any questions so far?

Power spectral density (PSD)… of ASK,PSK and FSK - . note that the bandwidth of fsk is higher than ask or psk .

Spectral Analysis - . spectral analysis is concerned with the determination of the energy or power spectrum of a