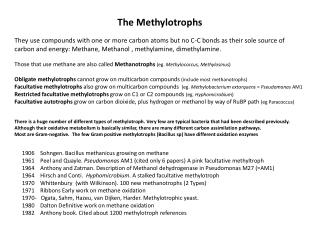 The Methylotrophs They use compounds with one or more carbon atoms but no C-C bonds as their sole source of carbon and energy: Methane, Methanol , methylamine, dimethylamine . Those that use methane are also called Methanotrophs ( eg . Methylococcus , Methylosinus )

Microbial physiology and metabolism - . these are lecture notes from a series of lectures given in the virology

Factors affecting growth yields in methylotrophs - . for growth on a simple defined medium with a single source of

The Domain Bacteria - . kingdom i: the proteobacteria . this is the largest and most diverse group. it has 5 clusters of