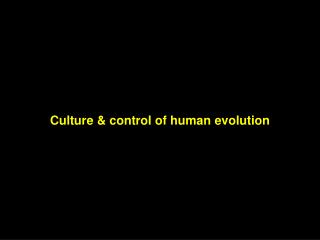 Human Evolution - . a brief history of the past 4 million years. the march of progress?. human evolution is often

Human Geography: Aspects of culture - . human geography. the study of people, their cultures, and their distribution

Human Evolution and PREHISTORY - . part iii: evolution of the genus homo and the development of early human culture.

Evolution and Human Health - . motivation evolutionary principles can contribute to understanding of origin and treatment

Human Evolution - . evolution is the slow and gradual process of change over a long period of time that has given rise to

The Story of Human Evolution - . part 1: from ape-like ancestors to modern humans part 2: what makes us human? evolution