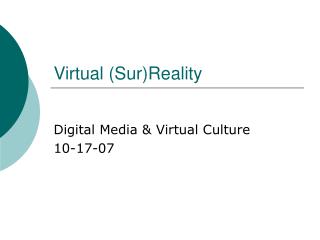 Virtual (Sur)Reality. Digital Media & Virtual Culture 10-17-07. What is Real?. How do you define real? How do you know the truth? Is truth/reality the same for everyone? Do we have free will in choosing our own reality?. Plato’s allegory – “the Cave”. “The Cave”.

How Do Augmented Reality Apps Work? Some Key Essentials - See more at: - The latest trend for mobile devices, augmented