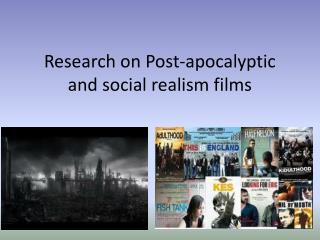 Magical Realism - . world literature. magical realism. frame or surface of the work may be conventionally realistic, but

Post Apocalyptic - . research, ideas, themes and mise-en-scene related to the concept of the post apocalyptic genre. the

Magical Realism Genre - . magical realism. a definition: the frame or surface of the work may be conventionally

Social Realism - . conventions. residential areas, giving it a more realist feel as you see here, it’s not a high

Realism Bellringer #1 3-26-14 - . directions: start this on a new sheet of paper. use your notes on realism to help you

Images from films - . what can be said about the misconceptions and stereotypes associated with images of mental illness