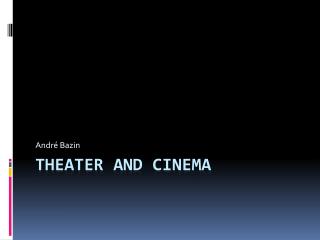 André Bazin. Theater and cinema. “What is specific to theater,” writes Henri Gouhier , in The Essence of Theater , “is the impossibility of separating off action & actor.” The cinema accommodates every form of reality save one – the physical presence of the actor

DRIVE-IN THEATERS - . an american icon. the inventor : richard hollingshead the year : 1933 the place: camden, nj. the

Drive-In Theater - . what do you see?. a large outdoor movie screen a projection booth a snack bar a large parking area

Movie Theaters - . what is a movie?. movie is moving pictures on the screen . . what are movie theaters?. a building to