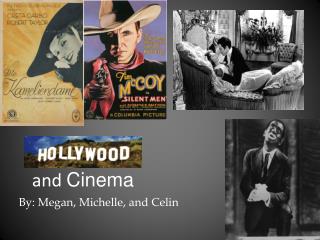 Hollywood and Cinema. By: Megan, Michelle, and Celin. Vaudeville. Vaudeville was a theatrical genre of variety entertainment in the United States from the early 1880s to the 1930s. Each performance was made up of a series of separate acts, which included musicians, dancers, comedians, etc. Hollywood vs British and Irish cinema - . genre: musical comedy. g rease vs the commitments. a profile on grease. year of

FROM HOLLYWOOD TO BOLLYWOOD: Bringing cinema to the learning environment - . stephen murphy. they say, a picture is worth

Cinema and Cinematography - . he is invited to the programme by the host. he tells about his last works and about his

History and Hollywood - . “there is no truth, there is only you, and what you make the truth.” -connor oberst. period