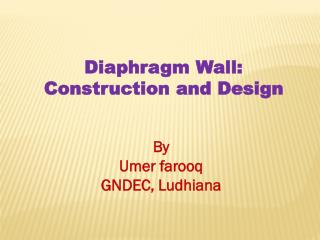 Design for Construction Safety (DfCS) 2 to 4 Hour Course - What is designing for construction safety? the process of

Design for Construction Safety (DfCS) 2 to 4 Hour Course - . what is designing for construction safety? . the process of

Wall Finishes pages 245-257 in &quot;Interior Construction and Detailing&quot; - . wall finishes include: those

Custom Wall Decals - This presentation is all about the products delivered by the “design with vinyl”. we specialize

THE WALL IN ARCHITECTURE - W a l l. the wall in architecture. sergio gil jesÚs cisneros. table of contents. w a l l.

Teamwork in the Design Phase ‐ Integrating Design and Construction Forecasting for Value - . john mack and jesse

DIAPHRAGM - . by dr.rashida memon. outlet of the thorax. it is the broad end of thorax surrounds the upper part of

Careers in Housing - . architect. somebody whose job is to design buildings and advise on their construction. definition: