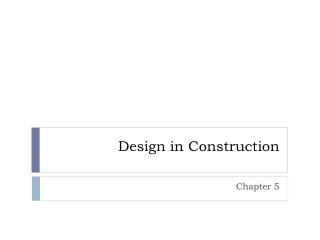 Design in Construction - . chapter 5. 5.1 design challenges. turning a specification for computer software into

Design and construction - . we need to seek a design that achieve the goal of the project which should be : compact

IMPECCABLE DESIGN & CONSTRUCTION - Kitchen these days is a genuine bit of craftsmanship. individuals who are new to

Design Construction Inc - There's only one chance to get your santa ana construction project done right. with design

STEEL DESIGN, FABRICATION & CONSTRUCTION IN SINGAPORE - If you are in need of design services, trouble shooting,