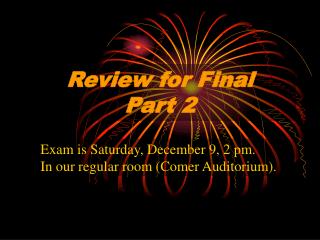 Review for Final Part 2. Exam is Saturday, December 9, 2 pm. In our regular room (Comer Auditorium). Final is comprehensive. Material is covered fairly evenly from all four units. Many multiple choice questions are similar to, but not identical to, the ones you've seen. Final Exam Part 2 Review - . the diagram shows the life cycle of the common housefly . which process is shown by this

Final Exam Part 2 Review - . what system is represented in the diagram? excretory 2. identify the function of this

Semester 2 Final Review Part 1 - . genetics, biotechnology, protein synthesis and evolution. we’ve all heard of it, but

Final Part 3 Review - . a student wanted to study the amount of mold growing on pizza at different temperatures. in the