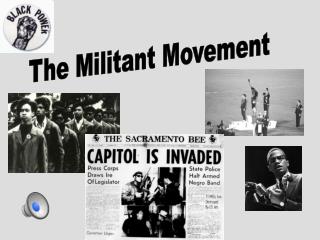 The Militant Movement. Learning Targets. Compare the nonviolent Civil Rights Movement to Black Power Examine the role of law enforcement and the government in the rise of the Black Power movement Explain the goals and actions of the Black Panther Party. Black Power. Militant Atheism - . part 2 the war in the west – culture wars. session 2.9 the fight for the soul of the west session

The Movement - . in humans, the movement realizes thanks to: the skeleton or skeletal system the apparatus

The LGBT Movement - . the history of the movement from stonewall through gay marriage, gender identity and transgender

The symbolist movement - . colm humphreys. characteristics of symbolist poetry. symbolists believed that their work could

The Lyceum Movement - . chris jahoda. what is a lyceum?. the lyceum is an institution for popular education providing