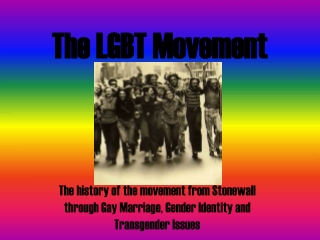 The LGBT Movement. The history of the movement from Stonewall through Gay Marriage, Gender Identity and Transgender Issues. To start; a few questions…. The gay rights movement burst on to the political scene in 1969. Why then?

The LGBT*Q Community - . are they together, side by side, or against each other? the picture in the england (uk). a

LGBT Lawyer - What does a lawyer who practices gay law

LGBT MOVEMENTS - . description of the terms. sex : refers to a person’s biological status and is typically categorized