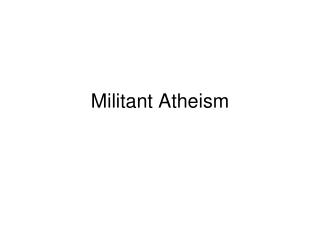 Atheism - . strongly disagree. does god exist? . before one can question the existence of god, one must determine what a

ATHEISM - . a lack of belief in god strong atheist – total denial of the existence of god weak atheist – without

Atheism - . disbelief in or denial of the existence of god or gods the doctrine that there is no god or gods. types of

Answering Atheism - . understanding and responding to those that reject god with all their heart, mind, soul and

Atheism and Agnosticism - . by: felicia, jordy , valeska , vincent. introduction. agnosticism: ‘a’ means without, ‘

Atheism and nonreligious beliefs - . jessika and helen from the secular alliance at iu. what is atheism?. “the belief

The Consequences of Atheism - . part 2 the war in the west – culture wars. session 2.9 the fight for the soul of the