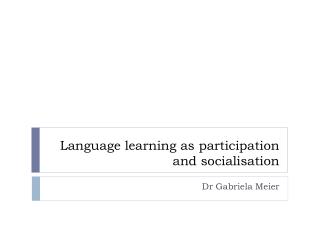 Learning Chinese as A Foreign Language - Today, lots of people from all across the world are learning to speak mandarin.

LEARNING ENGLISH AS A FOREIGN LANGUAGE - . humans are equipped with a language acquisition device that enables them to

Leadership as Participation - . lori nishiura mackenzie andrew mackenzie may 2010. all great ideas are scaled in service

ACTIVE PARTICIPATION AND LEARNING OUTCOMES - . aims . understand importance of correct hand washing technique so as to

Early Socialisation - . developmental psychology. this topic covers . . . nature of attachment and its role in early

Libraries, Learning and Language - The beginning and development of a multilingual public library system in singapore in

A socio-cultural approach to participation - . . an overview of basic concepts and methods hanna laitinen 2.3.2011.

COMMUNITY LANGUAGE LEARNING - . cll. historical overview. developed by charles a. curran and his associates in chicago.