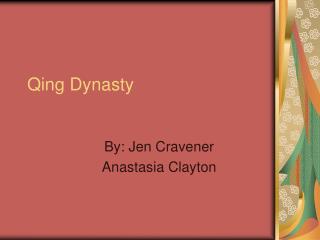 Qing Dynasty. By: Jen Cravener Anastasia Clayton. Qing’s Rule. 1644 A.D. to 1912 A.D. Leaders. Emperor Shunzhi- Dorgon made important decisions, because Shunzhi was a child at the time. Emperor Kangxi- started ruling at 15 and had one of the longest dynastic rules in history. The Peron’s: A Political Dynasty - . by nick elders. the trifecta of power. three members-juan, eva, and isabel each

Foreigners in the Tang Dynasty Tombs of China - . treasures from the silk road in private and museum collections. free

Journey to the West / Xijou ji; &amp; The Jin Ping Mei - . outline. i. novels from the last century of the ming