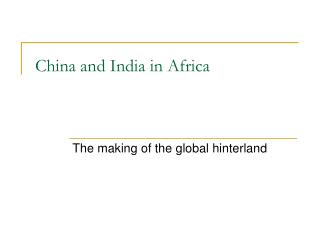 China and India in Africa

China and India in Africa The making of the global hinterland Similarities between India and China High and sustained rates of growth of aggregate and per capita national income For longer in China than India, but growth accelerating in India recently

China and India in Africa

Women as Paid Domestic Workers and Policy for Development : Case of China and India - Feminist economics in china and

European Imperialism in Asia: India, China, and Japan - . 2012. quiz. describe the life of an african under european

Early Civilizations in India and China - . india. geography: the indian subcontinent indus valley is located in the

India and China - . 3000 bc – ad 500. chapter objectives. explain how geography influenced the development of

Slides for Class: Imperialism in China, India, Africa and the Middle East - . the opium war [1839-42] trade war or drug

Is Electricity Supply a Binding Constraint to Economic Growth in developing countries? - . neil mcculloch and dalia

Will the US Recession lead to Global Slowdown? What Role for China and India? - . presentation by jan kregel , levy