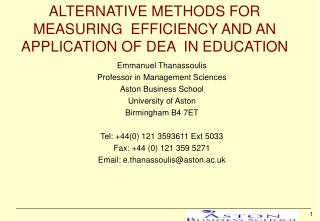 Christina Schäffner Aston University, Birmingham Squaring the circle: - The contribution of universities to the needs

Considering the Plug-in - . it’s incredibly easy to process transactions with your ubc plug-in. simple as 1-2-3 !. 1.

Application Approaches - . an animated graphic with blocks listing the 12 lessons of the course. the animation will zoom

An application of DEA to measure the efficiency of Spanish airports prior to privatization - . 指導教授: 林燦煌

The Watsons Go to Birmingham - . grade:. fourth. reading. subject:. date:. 1. what is one reason kenny is teased?. a. his