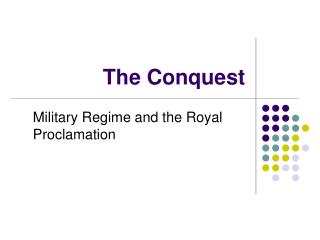 The Conquest. Military Regime and the Royal Proclamation. A Game of Charades. One word, four syllables First syllable: a car in Boston Second syllable: the ____________ and the pendulum Third syllable: not be but ________ Fourth syllable: not on time Capitulate. Characteristics of Romance Literature - What is a medieval romance?. a tale of high adventure. can be a religious

The Mayan Civilization Introduction - . conquest of the jungle. there never was a mayan prophesy. classic highland maya