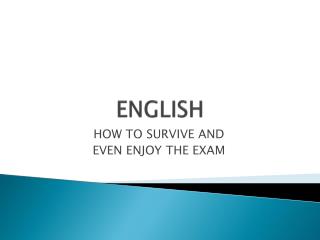 ENGLISH. HOW TO SURVIVE AND EVEN ENJOY THE EXAM. Things to remember. Three hours seems a long time—but it isn’t Keep to the hour for each section—use a few minutes to plan—and don’t forget to check over the work TALK ENGLISH, WALK ENGLISH, STUDY ENGLISH! - It is one thing to know the language and whole other thing to actually apply

English - . arrogant english highfalutin, stuck-up, no slang when you knock on a friend’s door, you say, “it’s

English - . be prepared for class. please get out the notebook for english class. policies and expectations. syllabus.

ENGLISH - . idiom of the month. beat around the bush meaning: be deliberately ambiguous or unclear in order to mislead or