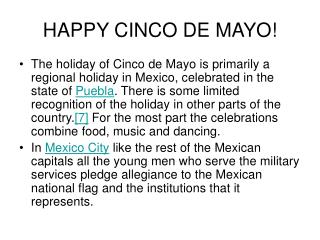 HAPPY CINCO DE MAYO!. The holiday of Cinco de Mayo is primarily a regional holiday in Mexico, celebrated in the state of Puebla . There is some limited recognition of the holiday in other parts of the country. [7] For the most part the celebrations combine food, music and dancing. Manga Happy-Manga Online - Manga happy is a sport competition manga written by naoki urasawa. it's not a very happy

CINCO DE MAYO - . por srta. galler. what is 5 de mayo a celebration of?. 5 de mayo is the day mexico celebrates their

Cinco de mayo - . is a celebration held on may 5. it is celebrated in the united states  and in mexico, primarily in

Happy Friday - . we have a quiz on day 2 of the 1920s. look over your notes and pay special attention to economic policy

Being happy together - . do you help your mother? what did you do yesterday to make your parents happy ?. one busy

Celebrations! - . timber monteith and katelyn regan. enduring understandings. there is always something to celebrate.