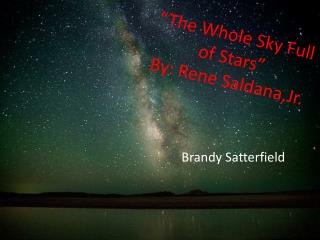 “The Whole Sky Full of Stars” By: Rene Saldana,Jr. “The Whole Sky Full of Stars” By: Rene Saldana,Jr.

Rene Descartes, Pierre Fermat and Blaise Pascal - . descartes, fermat and pascal: a philosopher, an amateur and a

Temperature Spectral Classification - . learning to recognize the pattern of spectral lines produced in the atmospheres

Astronomy: Horizons 10th edition - . michael seeds. gravity is patient—so patient it can kill stars. all over the sky,