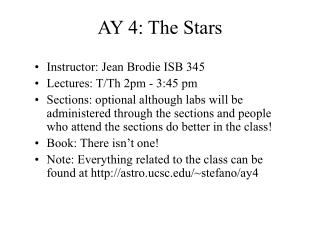 AY 4: The Stars. Instructor: Jean Brodie ISB 345 Lectures: T/Th 2pm - 3:45 pm Sections: optional although labs will be administered through the sections and people who attend the sections do better in the class! Book: There isn’t one! Stars pay tribute to Stevie Wonder - Stars of the music world, from beyonce to tony bennett to pharrell williams, salute

Characteristics of Stars - . distances to the stars. stars are separated by vast distances. astronomers use units called

An Introduction to Astronomy Part XI: The Birth and Death of Stars - . lambert e. murray, ph.d. professor of physics.

Eddington and The Internal Constitution of the Stars - . what appliance can pierce through the outer layers of a star and