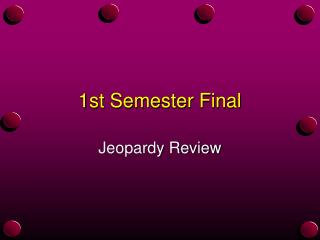 1st Semester Final. Jeopardy Review. On Your Mark. Get Set. Let's Go!!. This European power, the first to explore new water routes to Asia, was disinterested in colonization. Portugal. Which English colony was founded by a Roman Catholic and practiced religious toleration?. Maryland. Semester final - . by : jazmin esparza 1/25/13. internet safety. protect your information never give out your address to

SEMESTER FINAL 2012 - . ap psychology. summarize the nature-nurture debate. what was the major argument between the early

Final Semester Grades - . to verify grades are correct. be sure all assignment due dates are within the nine week and/or

1st Semester Orientation Spring 2010 - . welcome to ivc nursing program. this is a program, not just a group of classes

Art 1A Semester Final - . david sainz. principles and element of art. line- is the path of a point moving through