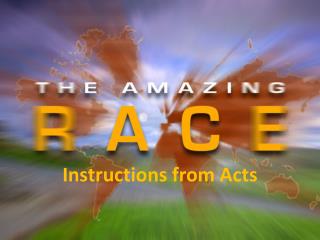 Instructions from Acts. The Amazing Race. Last fall we began a series in the book of Acts. Acts is not simply historical information; it is a manual for living in the power of the Spirit. A Fresh Wind of God’s Spirit is Blowing.

Acts 13 - . click for question. according to acts 13:1 in what church were there certain prophets and teachers?. the

Acts 2:42-47 - . they devoted themselves to the apostles’ teaching and to the fellowship, to the breaking of bread and

Book of Acts Chapter 26 - . theme: paul before agrippa. acts 26:1. then agrippa said unto paul, thou art permitted to

True : that the gospel instructions have far reaching effects on society and social relations - “the gospel is, in some

Acts 2:42-47 -  42 they devoted themselves to the apostles’ teaching and to the fellowship, to the breaking of bread

Acts 2:1-17 - . when the day of pentecost came, they were all together in one place. 2 suddenly a sound like the blowing

The Acts of the Apostles - . scripture workshop episcopal church of the resurrection winter 2011. acts

Acts 8 - . begins a new thought in the book acts 1-7 gospel in jerusalem acts 8-12 gospel in judea and samaria gospel is

The Acts . - By the group of: tyler dawson, marquese hayes, chris reid, connor nichols. the acts . an act of the british

Acts of the Apostles - . i. background a. authorship—luke author of gospel “beloved physician” missionary with paul

Acts 9-12 - . major themes: god is no respecter to persons conversion gospel to the gentiles change is not easy listening

Book of Acts Chapter 20 - . theme: third missionary journey of paul concluded. acts 20:1. and after the uproar was