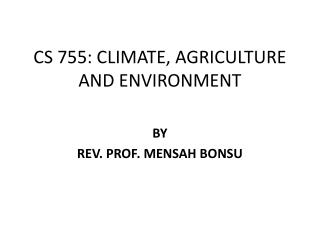 Content Introduction: Disasters and Climate Change in the Philippines - Land use in flood-prone areas structure of a

The marine environment Ocean-climate relationships - . the oceans. central case: collapse of the cod fisheries. no fish

CLIMATE - . what is climate?. climate - the weather conditions prevailing in an area in general over a long period.

Defining Climate - . ch. 14. 1. climatology. climatology : the study of earth’s climate and factors that affect past,

Climate Factors - . climate. weather , by definition, is the current state or condition of the atmosphere at a given time

A High-Order Finite-Volume Scheme for the Dynamical Core of Weather and Climate Models - . christiane jablonowski and

Climate-smart agriculture for food security - . side event in bonn, 10 june 2011 organized by fao and ccafs. peter