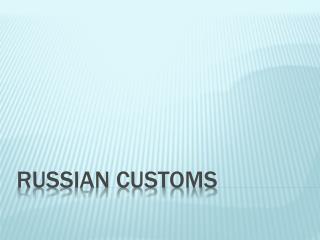 Russian Customs. When death occurs. Upon learning about the death , telephone or visit the family to offer condolences. Flowers may be sent, or the family may suggest memorial contributions be made in lieu of flowers. It is also appropriate to send Mealtime Customs - . family meals. eating together is important to a family’s social health. how many of you eat meals

Wedding Customs - . in morocco. the traditional moroccan wedding has quite an elaborate and meaningful process. the

Greeting Customs - . some differences among cultures. meeting people from other cultures may create discomfort or