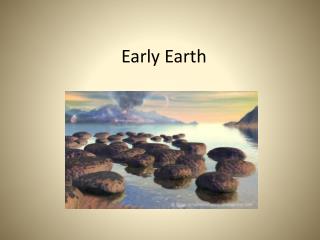 Early Earth. The Big Bang. The Big Bang. Using the math of general relativity, one can find an infinite density and temperature at a finite past. This singularity constitutes the birth of our Universe. The Big Bang. Early Earth Conditions - . origin of life beliefs. the big bang theory states that all matter and energy in the universe

The early Earth - . goal. to understand modern hypotheses and theories about the formation of the universe, our solar

The early Earth - . goals. to understand: (1) solar nebula theory for formation of earth, (2) how this led to earth ’ s

Early Earth Foldable - . ch 14 fold 2 papers so that there are 4 flaps. the titles of the for should be: redi and

Early Earth Foldable - . ch 14 fold 2 papers so that there are 4 flaps. the titles of the for should be: redi and pasteur

Hypothesis of early Earth - . about 4.4 billion years ago, earth might have cooled enough for the water in its atmosphere

Earth’ s Early History - . formation of the earth. the earth is 4.6 billion years old. the earth was made of large

Early Life on Earth - . overview if you were able to travel back to visit the earth during the archaean eon (3.8 to 2.5