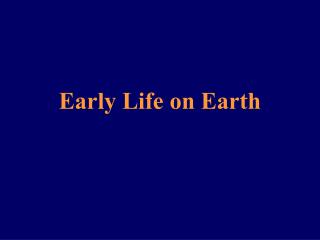 Early Life on Earth. Overview If you were able to travel back to visit the Earth during the Archaean Eon (3.8 to 2.5 bya), you would likely not recognize it Life on Earth - . 1.3. a short history of life on earth. the earliest life forms appeared on earth 3.5 billion years ago

Life On Earth - . do now: scientists estimate that there may be as many as 100,000,000 different species of organisms on

Life On Earth - . why does life exist on earth?. essential standard. 6.e. 1 understand the earth/moon/ sun system , and

Life on Earth - . what we learn from other planetary systems. protoplanetary disks accretion of planets expulsion and

Life On Earth - . do now: scientists estimate that there may be as many as 100,000,000 different species of organisms on

Life on Earth - . early earth what was early earth like? scientific theories about evolution of organic molecules

Early Earth and Theories on the Origins of Life! - . in your investigation today, you will explore the early experiments

Early Earth and Origin of Life - . chapter 26. earth’s original organisms are microscopic and unicellular. life on

B3 Life on Earth - . lesson 11: a sustainable future. objectives. must define sustainability should apply knowledge about

B3 Life on Earth - . lesson 1: species and adaptation. objectives. must explain how species are adapted to their