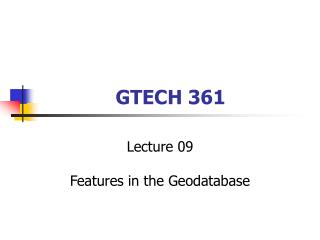 GTECH 361 - . lecture 10 behavior and the geodatabase. rules and behavior. ..is what makes geodatabase features smart

GTECH 361 - . lecture 02 introduction to arcgis. today’s objectives. explore a map and get information about map

GTECH 201 - . lecture 02 the computing environment in the geography department. technical prelims. data versus

GTECH 201 - . lecture 03 data measurements data errors. measurement. the process of obtaining scores for each element for

Gtech AirRam K9 Ebook - A guide to the many benefits of the gtech airram k9 cordless vacuum cleaner. find out more about

BA 361 - . ice breaker. name major in a short phrase or a couple of words: what organization have you been or are

Android Nougat: Key features revealed - Google shocked everybody with the declaration of the android 7.0 nougat name on