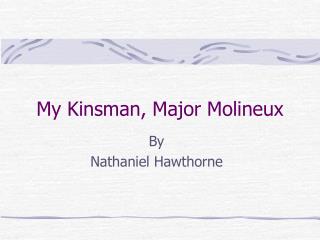 Kinsman Redeemer - . lesson 3. the redemption of the earth. genesis 1:26-31 man was to rule over the earth, fill it and

Kinsman-redeemer (goel) - . related by blood to those he redeems able to pay the price of redemption willing to redeem

My Final Major Project - . ferheen batool naqvi. for the

My foremost major competency - . leadership skills. the illustrative situation. in my high school, i joined into

Presented by: Larry Kinsman ORIN Remediation Technologies - . “the good, the bad, and the ugly” experiences of

My House Needs Major Repairs- What Are My Options? - Selling a house that needs repairs can be one of the most difficult

Why I Chose Communications as my Major - . one woman’s j ourney on the road to success!. by tina m. yarbrough april 16,

What my I.S. Major did for me? - . sam paddock. the past 5 years since graduating with is honours what is my current

KINSMAN REDEEMER- EXPRESSION OF GOD’S LOVING KINDNESS - A story of unfamiliar customs and cultures; an example of god