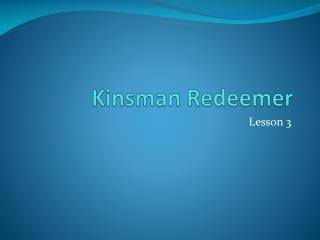 Kinsman Redeemer. Lesson 3. The Redemption of the Earth. Genesis 1:26-31 Man was to Rule over the earth, Fill it and Subdue it. Man disobeyed and lost the land Hebrews 2:5-15 Man was crowned by God with glory and honor Jesus is mentioned as the Son of Man in vs. 9

RUTH: Complimentary book to Judges - . high drama and divine intervention. title of the book. both the hebrew, the greek

Introducing the ministry of Redeemer Broadcasting - . faithful to the scriptures and supporting the church. how did

The Book of Ruth - A story of love. the book of ruth. keys to understanding ruth. law of the levirate marriage

RUTH - . faithfulness in the midst of chaos. ruth: major characters. naomi – an israelite woman who becomes a widow

KINSMAN REDEEMER- EXPRESSION OF GOD’S LOVING KINDNESS - A story of unfamiliar customs and cultures; an example of god

Changing the Bad to Good The Book of Ruth - . naomi is all alone in a foreign country and she decided to go back to

Redeemer Nicole C. Mullen - . ccli# 1119107. who taught the sun where to stand in the morning? who told the ocean you can

Call to Worship - . “truly my soul waits upon god...my soul, wait only upon god; for my expectation is from him.”.