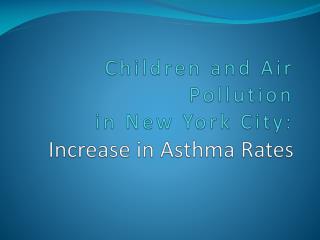 Children and Air Pollution in New York City: Increase in Asthma Rates. Literature Reviews. Asthma Rates and Statistics - Harlem. One out of every four children in Harlem has asthma, according to a study released by the Harlem Hospital Center.

New York - . new york is located on the east coast the 11 th state in america. new york. new york’s name is “the

ASTHMA: IS YOUR COMPANY AT RISK? - . barbara hickcox, rn, ms asthma coordinator ohio department of health. what will we

G IN A - . lobal itiative for sthma. program objectives. increase appreciation of asthma as a global public health