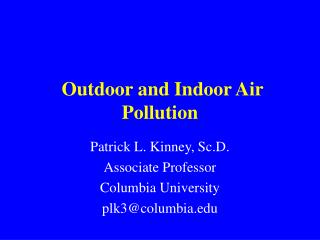 Protecting Yourself From Indoor And Outdoor Air Pollution - Nowadays, indoor air can be 10 times more polluted than

INDOOR AIR POLLUTION - . just because you can’t see it, doesn’t mean it isn’t there. when was the last time you

Indoor Air Pollution : Radon - Most of the cancer risk resulting from radon in the household water supply is due to