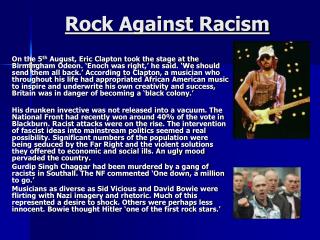 Stand Against Racism - . goal:. to have the student body pledge to support the “stand against racism.” . examples of

Christians who campaigned against racism - . work by 9a - january 2014. homework task. choose any two of these people

The Biblical Case Against Racism - . racism defined. any explicit or implicit belief or practice that qualitatively

A. WWII Fought Against Racism

European Commission against Racism and Intolerance (ECRI) - . the independent human rights monitoring body of the council

Racism - . table of contents. 1.an introduction to racism 2.the history of racism 3.types of racism 4.segregation 5.rosa

Racism - . what generalizations can be made about race, ethnicity, and culture, and how can these be justified ?.

Racism - . submitted by simona v ėžytė. the outline of presentation :. the conception of racism the main levels of

Racism - . by: arianna cruz period 6. what is racism?. racism the belief that all members of each race possess