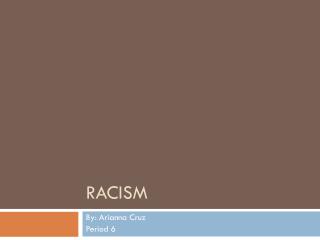 Racism. By: Arianna Cruz Period 6. What is Racism?. Racism The belief that all members of each race possess characteristics or abilities specific to that race, esp. so to distinguish it as inferior or superior to another race or races

Racism - . table of contents. 1.an introduction to racism 2.the history of racism 3.types of racism 4.segregation 5.rosa

Racism in America - . racism. “ the prejudice that members of one race are intrinsically superior to members of other

Racism - . racism the belief that one racial category is innately superior or inferior to another. racism has been

Racism - . by roman namdar and julia kurek. what is racism?. when the basis of discrimination is someone’s perception

What Is Racism? - . chapter 6. some background. any of us, if born in another culture, would learn and follow the basic

Color Blind Racism - . in this presentation you will learn the answers to the following questions; does racism still

Racism and the Effects of i t - . by zach johnston and dylan giager. about racism. racism is discriminating against a

Immigration and Racism in the 1920s - Objective: explain how and why racism and immigration were important issues in the

Race ≠Racism Racism ≠ Ethnocentrism - . there is a legitimate place for the concept of race in biology; indeed it is

“How do we define racism?” - . learning objectives: to be able to understand the different definitions of racism. to