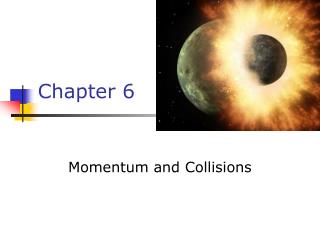 Chapter 6. Momentum and Collisions. Momentum. The linear momentum of an object of mass m moving with a velocity is defined as the product of the mass and the velocity SI Units are kg m / s Vector quantity: the direction of the momentum is same as velocity’s. Momentum and Force.