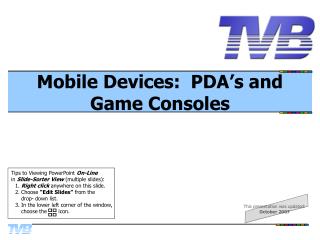 Tips to Viewing PowerPoint On-Line in Slide-Sorter View (multiple slides): 1. Right click anywhere on this slide. 2. Choose “Edit Slides” from the drop- down list. 3. In the lower left corner of the window, choose the icon. Mobile Devices: PDA’s and Game Consoles

Intro to Adaptive Web Design [ChaDev Lunch] - For years, designers and developers have griped about the difficulties they

Mobile One for SAP Business One - . presentation overview. what is mobile one? mobile one technology what mobile devices

4.02 Responsive Web Design Concepts - . designing for mobile devices. guiding questions. what are the challenges of