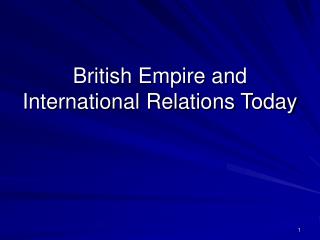 British Empire and International Relations Today Why is it important to start with the Empire? Influence on: PEOPLE – MIGRATION, SLAVE TRADE, SETTLEMENT LAND – AGRICULTURE, CROPS, TRADE LANGUAGE – ENGLISH IN EDUCATION; ADMINISTRATION; AS AN OFFICIAL LANGUAGE

Global Responses to the Rise of the West - . ap world history. history of imperialism. world in 1900. british empire in

In the 1800’s, Britain traded thousands of goods with many countries all over the world. - Trade with africa.

How did Gandhi oppose the British Empire? - . objectives. in this activity you will: learn the methods used by gandhi to

The British Empire in India - . i - indian imperialism began with the british east india company- set up trading posts in

International Relations Theory - . realism; pluralism; globalism and beyond. international relations. it is a discipline

THE BRITISH EMPIRE - The most powerful empire the world had ever known. the british empire. “the sun never sets on the

The British Take Over India - . section 4 chapter 25. after the death of ranjit singh, britain conquered the sikh empire.

The British Empire – India - . the sun never sets on the british empire. eq: how did hinduism, islam, and the british

AMERICA IN THE BRITISH EMPIRE - . chapter 3 (82-111). the british colonial system. due to distance, each colony was

The Image of Israel in the UK - . presentation h.e. ron prosor ambassador of israel to the uk . the uk – punching above

Bellwork - . please take out your notebooks and a pen or pencil. today’s agenda: japanese expansion tape in notes and

International Relations - . psc 124.200: introduction. today. are you registered for this class? digital pictures