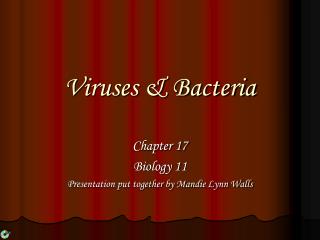 Viruses & Bacteria. Chapter 17 Biology 11 Presentation put together by Mandie Lynn Walls. What are Viruses. A virus is a non-cellular particle made up of genetic material and protein that can invade living cells. T4 Bacteriophage. Herpes Virus. Escherichia Coli Bacterium.