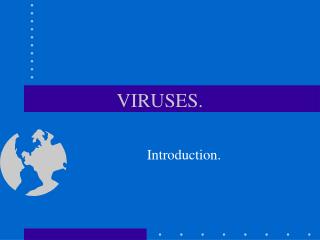 VIRUSES. Introduction. DISCOVERY OF VIRUSES. The discovery of viruses resulted from the search for the infectious agent causing tobacco mosaic plants and gives their leaves a mosaic coloration. ADOLF MEYER.

Viruses - . viruses. viruses are the smallest of all the microbes. they are also very different to the bacteria and fungi

Viruses - . microbiology 221. viruses. obligate intracellular parasites they are able to reproduce their life cycle only

Viruses - . doesn’t belong to any kingdom -it’s not a plant or an animal. -it’s not a fungi, protist, or bacteria.

Viruses - . sb3. students will derive the relationship between single-celled and multi-celled organisms and the

6.1 General Properties of Viruses 6.2 Structure of viruses 6.3 The cultivation of viruses - Chapter 6 viruses. 6.1

Viruses - . alive or not?. there are many viruses that affect humans. here are a few of them. the aids virus. herpes

Viruses - . what is a virus?. viruses are not alive a virus in an obligate intracellular parasite requires host cell to

Viruses - . what are viruses?. viruses are particles of nucleic acid, protein, and in some cases lipids. all viruses

Viruses - Look at the list of viruses on page 13 &amp; describe the significance, both positive and negative, of