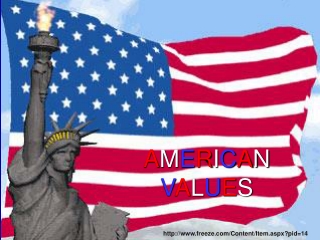 A M E R I C A N V A L U E S. http://www.freeze.com/Content/Item.aspx?pid=14. We hold these truths to be self-evident , that all men are created equal, that they are endowed by their Creator with certain unalienable rights , that among these are life, liberty and the pursuit of happiness .