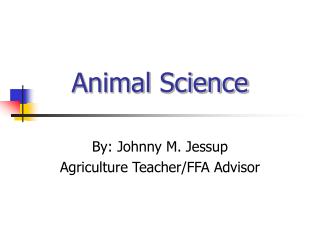 Animal Husbandry - . giacomini mattia inglese 3˚a. what is it ?. it is the branch of agriculture concerned with the

Careers in Animal Science - . if you are interested in animal science. you will find the best opportunities with

Animal Science 434 - . reproductive cycles in the female. terminology. estrus is a noun. the cow is displaying estrus.

Animal Science 434 - . lecture 11: the follicular phase of the estrous cycle. tonic and preovulatory surge of gnrh.