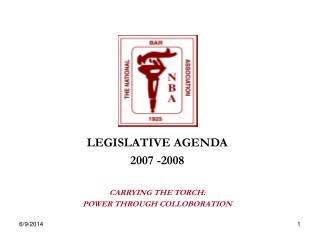 LEGISLATIVE AGENDA 2007 -2008 CARRYING THE TORCH: POWER THROUGH COLLOBORATION. Objectives of the National Bar Association. "...to promote legislation that will improve the economic condition of all American citizens, regardless of race, sex or creed in their

The Legislative Process - . the steps for how a bill becomes a law. bills. types of bills where do bills originate?.