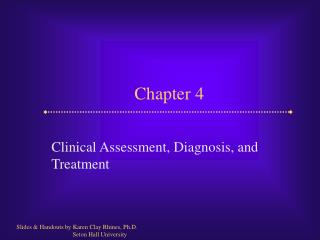 Chapter 4. Clinical Assessment, Diagnosis, and Treatment. Slides & Handouts by Karen Clay Rhines, Ph.D. Seton Hall University. Clinical Assessment: How and Why Does the Client Behave Abnormally?. What is assessment? The collecting of relevant information in an effort to reach a conclusion