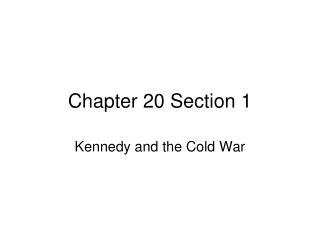 Chapter 20 Section 1. Kennedy and the Cold War. Voters restless in 1960 Economy in recession Soviets developed Sputnik I and long range missiles Military power of US falling behind Soviets U2 incident Cuba aligned with Soviets Seemed like US was losing the Cold War. The Election of 1960.