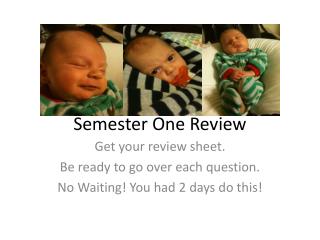 Semester One Review. Get your review sheet. Be ready to go over each question. No Waiting! You had 2 days do this!. 1. What event happens in Texas during 1845 . Texas becomes the 28 th state. or Texas joins the United States of America as the 28 th state. Semester one exam review - . nouns. definition. a noun is a word that names a person , a place, a thing, or an idea. .

AP Semester One Final Review - . reminder:. your final will be based on all your journals: style grammar methods of

Review for Biology Semester One Final - . being skeptical and being open to change are parts of homeostasis. control

Semester Review - . german settlers clashed with other texans over the issue of a. empressario contracts. b. land prices.

Semester Review - . booker t. washington believed that the best way for blacks to improve their status in the united

Semester Review - . what are the 3 subatomic particles that make up an atom?. protons neutrons electrons. protons-

8th Grade Semester One English Exam Review - . to be used in conjunction with review handout and your textbook. nouns.